Who said, “Beauty is in the eyes of the beholder?” If you said Shakespeare, you are correct.  But you’d be right if you said Ben Franklin.  “Plato” would also earn you a gold star.  How can that be?  All three observed this human truth, but it was a 19th century author named Margaret Wolfe Hungerford who actually coined the phrase as it’s currently used.  And is it ever true – three times in one day I experienced similar during a trip to Philadelphia.

Public-private partnership between Philadelphia and InSinkErator

Not long ago, Philadelphia launched an initiative called “Clean Kitchen, Green Community” to encourage the use of food waste disposers among residents (https://www.philadelphiastreets.com/ckgc-overview.aspx). The city’s Greenworks program, a vision for the city’s sustainability, defined numerous goals and among them were improved recycling and renewable energy generation.  Disposers later were identified by the city as a tool to help achieve those goals. To spread the word of the “disposer encouragement” program (which I will explain in a bit) the mayor’s office held a press conference. Numerous city officials and politicians were on-hand and spoke, including Mayor Nutter himself, but what was it that seemed to steal the show?  The disposer on display that the mayor – and others – used to grind up food scraps. I guess to some reporters, a city official stuffing gnawed chicken wings down the drain was an eye-catcher for viewers and readers.

I had a little down time before I was due at the press event so I decided to visit Philadelphia’s Northeast Water Pollution Control Plant (NWPCP).  Having made a point of visiting many wastewater treatment plants in my career, you could call me a sewage sightseer.  Paul Kohl of Philadelphia Water Department (PWD) escorted me, describing the major plant upgrade to the anaerobic digestion facilities. PWD is in the midst of adding cogeneration equipment to better utilize the methane gas from the process and recognizes the value of adding food waste to digesters to improve biogas production, which means they can create more energy and move towards energy independence. Resource recovery and energy independence is a goal recently adopted by the Water Environment Federation. Similarly, the Water Environment Research Foundation is funding projects to promote energy independence through its Roadmap to Net-Zero Energy. Seeing the Northeast plant and its improvements made me, frankly, a little misty-eyed.  It was a sight to behold. 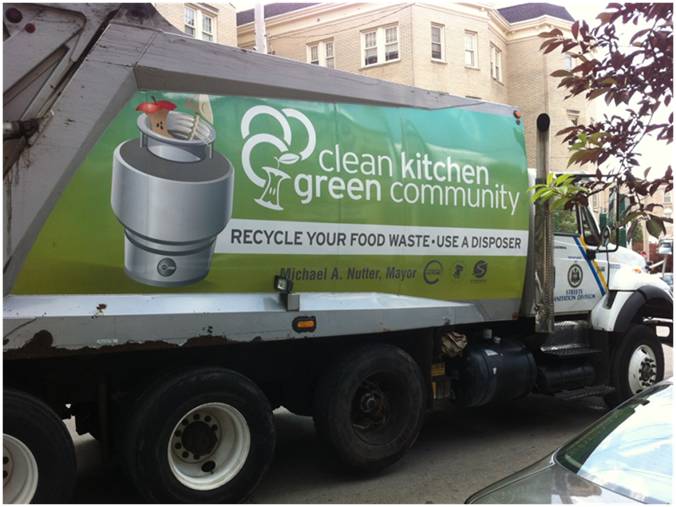 “Clean Kitchen, Green Community” is a public-private partnership between the City of Philadelphia and InSinkErator to encourage residents to use disposers to divert food scraps from landfills and promote energy generation at Philadelphia’s WWTPs.

After the tour, I went to the press conference. Out the window I caught sight of a garbage truck.  Carrying a placard announcing the disposer campaign, the truck had been parked on the street for the benefit of the news crews.  I also caught sight of one of my co-workers admiring it.  She exclaimed it was the prettiest garbage truck she’d ever seen.  Of course, she was viewing it through the prism of having worked on the vehicle placard’s image and wording.

I think you’ll agree many factors influence the way we look at things.  How do you, wastewater people, view the idea of murals painted on treatment tanks, described as Poetry in Paint at Savannah President Street WWTP, and why?  Any questions about the Philadelphia initiative?

3 Replies to “In the Eyes of the Beholder”