This month, it featured an article titled “New Paradigms for Energy,” a story about a WERF team exploring how to reduce energy dependence at treatment plants.  It’s evidence of how the wastewater industry is moving towards resource recovery – of clean water, energy and fertilizer. (The article was particularly interesting to me because I serve on the WERF Issues Area Team for Energy Management, which provides oversight.) 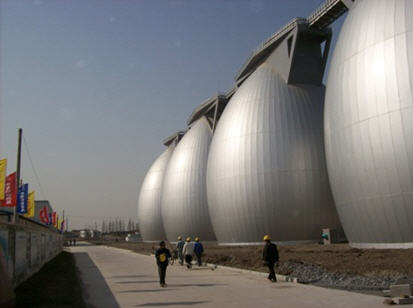 New, egg-shaped AD units in Shanghai where I visited December, 2010

In the article, one of the co-principal investigators, Lori Stone of Black & Veatch, said that the project focused on wastewater facilities processing 5 MGD or more and admitted that plant size was “somewhat arbitrary,” but large plants are where anaerobic digestion (AD) is normally used. As discussed previously, AD is the process associated with managing biosolids to produce energy in the form of methane gas. Obviously, very large plants (like the one I visited in Shanghai pictured here) have much to gain by utilizing AD to efficiently reduce the amount of biosolids.  It’s accepted thinking that smaller plants aren’t willing or interested in pursuing energy independence, and in many cases they do not even utilize AD.

One Small WWTP Bucks the Trend

However, the WWTP in Holly, MI utilizes AD and treats only ~ 1 MGD. I talked to Tim Stallcup, who manages Holly, and he said using AD is a “no brainer.” AD allows them to reduce volatile solids by 65% and produces around 65% of the natural gas needed for heating their mesophilic digesters. The result is an annual savings of around $50,000 in land application costs as compared to comparable area plants, and $30,000 in energy savings. While Holly WWTP only produces enough biogas to offset process heating costs, biogas could be further improved by adding food waste and FOG.

Small plants like Holly significantly outnumber the larger facilities. Of the 16,000 or so treatment plants in the U.S., only about 1238 utilize AD (according to our database,) leaving almost 15,000 plants that don’t use anaerobic digestion.  Nationally, our WWTPs consume 21 billion kilowatt hours of energy[1]. Just a modest 25% reduction of this total energy use could reduce greenhouse gas emissions the equivalent of taking 771,695 cars off the road!

Newer, low-energy technologies are being researched such as anaerobic membrane reactors.  That takes time. And there is the subject of capital investment when it comes to conversion at small plants.  But Tim Stallcup of Holly didn’t let his plant’s size stand in his way.  Is it remotely feasible for other small plants to follow his lead and utilize AD?  Do you know of any?