Four Points About Biosolids You May Not Want to Believe

This month, I will try to persuade you that we should not outlaw or discourage use of a valuable resource, biosolids, on the basis of a problem not proven to exist. See if you agree.

During the time that I worked at a wastewater treatment plant where we distributed biosolids, I met many farmers. Their demand for biosolids often exceeded our supply because of the results farmers came to expect. This picture is proof of the statement that biosolids are a valuable resource in crop growth. 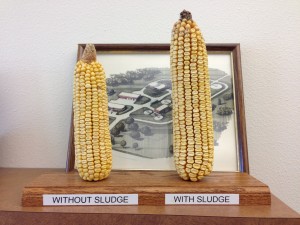 This is corn grown without biosolids, compared to corn grown with biosolids (AKA sludge.) Both ears are from Burlington, Wisconsin and the display itself was at the local wastewater treatment plant.

Biosolids are also necessary for the infrastructure of modern civilization because they are a means of reducing the volume of the byproducts of wastewater treatment, something we’d be hard-pressed to live without.

The Limits of Credibility

I contend that these points alone have not made a credible case against the use of biosolids and in particular, points number three and four fail to do so. Here is why.

The first point is easily rebuffed as somewhat unserious. While it’s true that biosolids can have an odor, it’s not dissimilar to that of spreading manure. How practical would it be to outlaw fertilizing of crops just because of an unpleasant smell once or twice a year? The next two points about pathogens and heavy metals are false arguments because the pathogens and metals already must be reduced in order to meet the EPA 503 regulatory limits. Non-reduction is not an option if biosolids are to be distributed as either Class A or Class B.

This leaves point number 4, toxics, a term that includes organic compounds such as polychlorinated biphenyls (PCBs) and personal care and pharmaceutical products (PCPPs.) PCBs and PCPPs have been identified in biosolids but at very low levels. Their presence alone does not automatically equate to harmful effects. Just because a lab identified the existence of something as a “contaminant” when found at 1 part per million or per billion, does not mean that a cause-and-effect relationship exists. For example, we know low-level nitrates (45 ppm) in drinking water can cause methemoglobinemia (blue baby syndrome), but even lower levels are tolerable. Identification of a chemical is not enough. It is essential to establish a cause and effect relationship as part of a hazard evaluation before pursuing control or prohibition.

According to the Water Environment Federation, the EPA assessed 200 compounds and elements from an original list of thousands before looking closer at 22 specific constituents. They ultimately decided to set limits for nine: Arsenic, Cadmium, Copper, Lead, Mercury, Molybdenum, Nickel, Selenium and Zinc.   So let’s look at one of these metals, Cadmium.

Assuming a typical concentration in biosolids of 7 mg/kg Cadmium (found mostly in batteries), to reach the annual limit for Cadmium on an acre of ground, a farmer would have to apply 121 dry tons of biosolids per acre. To reach the lifetime limit, a farmer would need to apply 2,500 dry tons per acre.  For reference, farms growing corn would typically limit biosolids application to only around 6 dry tons of biosolids per acre per year to limit Nitrogen, so they would never even come close to the limit allowed for Cadmium anyway!

This reminds me of the artificial sweetener debate from a long time ago when consumption of so much sweetener over the course of a lifetime was needed to make the FDA’s case about harm that the argument became a laughing stock with the public and ultimately went away on its own.

Do you agree that the usual arguments against the valuable resource that is biosolids need a whole lot more documentation and research before they deserve serious consideration?